Research: No Correlation Between Undocumented Immigrants and Crime 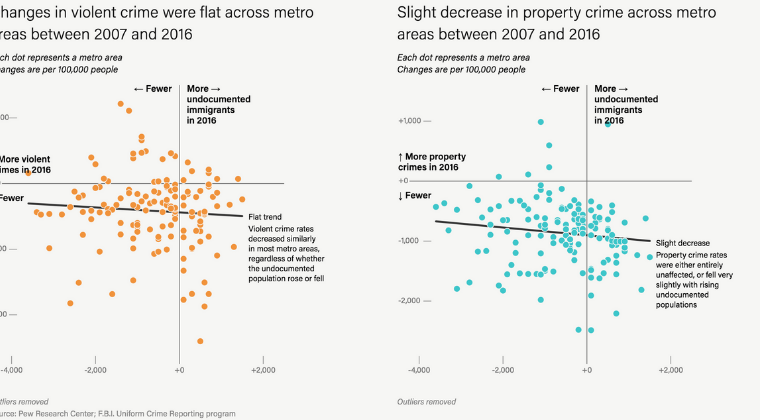 The New York Times reports the Pew Research Center has released estimates of undocumented populations sorted by metro area to analyze how unauthorized immigration has affected crime rates since 2007. Because there is no exact count of unauthorized immigrants living in the United States, Pew researchers compared Department of Homeland Security numbers of immigrants with legal status to Census numbers estimating that in 2016 there were an estimated 10.7 million undocumented immigrants nationwide.

Correlation Between Undocumented Immigrants and Crime

Using the Pew analysis,  a new study by the Marshall Project concluded,  “growth in illegal immigration does not lead to higher local crime rates.”

Illegal immigration itself is a crime. When not including the crime of being an undocumented immigrant, the study showed the following results:

While the Pew study said 50% of Americans believe that undocumented immigrants lead to an increase in crime, Robert Adelman, an associate professor at the State University of New York (SUNY) at Buffalo said, “They bring a social and economic vitality to metro areas that benefit those areas.” Sociologists believe that undocumented immigrants’ goal to get employment and avoid deportation makes them less likely to engage in criminal behavior.

What the Godoy Law Firm Believes

“The Marshall Project shows that crime the crime rate in Chicago metro area stayed the same with the number of unauthorized immigrants living here fell. Changing public perception about immigration takes time, I’m glad to see that a respected, non-partisan research institute is clearly stating there is no link between undocumented immigration and the crime rate – if anything, the crime rate may lower in areas with higher rates of undocumenteds.”

The attorneys at Godoy Law Office are passionate about assisting immigrant and refugee families to achieve the American Dream. If you need help with an immigration issue, please contact our office at 312-635-4029.